DHAAKAD is all style and no substance and fails to deliver entertainment value.

DHAAKAD is the story of a ruthless secret agent. Agent Agni (Kangana Ranaut) is an orphan whose parents were killed by an assassin while she was a kid. She is then raised by a man (Saswata Chatterjee) who works for the ITF, an agency responsible for the country’s safety. Agni turns into a badass agent and she’s sent to Budapest to find out details about a human trafficking racket. As per the information collected by her, the mastermind of this racket is Rudraveer (Arjun Rampal) and his partner, Rohini (Divya Dutta). Rudraveer is a mysterious character, who operates from Sohagpur Coal Fields near Bhopal, India. Till date, no one has been able to prove his connection with the flesh trade. Agni is sent to collect information on Rudraveer so that he can be nabbed. Agni is hesitant at first about going to India as that’s where her parents died. Nevertheless, she goes ahead, not realizing that she’s going to face the toughest opponent of her career. What happens next forms the rest of the film. 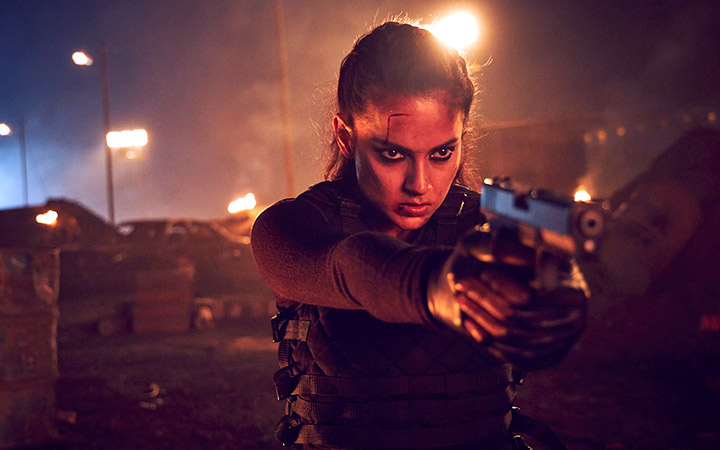 Razneesh ‘Razy’ Ghai’s direction is very poor. He has shot the film very well. The product looks quite stylish. A few scenes are also well executed like Agni witnessing a wrestling fight, Agni masquerading as a fashion designer Amina and meeting Rohini, etc. However, most of the scenes fail to entice as the soul is missing. Some action and plot points are lifted from Hollywood films and also, and there’s too much action in the film. There’s no scope for drama or humour and as a result, it doesn’t give a wholesome entertaining experience. The director’s biggest shortcoming is that he doesn’t explain things to the audience. The twist in the tale in the climax is unexpected but viewers never find out the reason behind it. In fact, it’s shocking that something of this sort even got approved!

Kangana Ranaut gives a fine performance and is a pro when it comes to action scenes. However, she’s let down by the script as the writing turned her character into a unidimensional one. Arjun Rampal tries too hard to be cool but fails. His dialogues are difficult to comprehend. Divya Dutta looks menacing and gives a good performance. Saswata Chatterjee is decent. Sharib Hashmi (Fazal) is fine. Dishita Jain (Zaira) is adorable. Ravinder Awana (Khalid) and Daniel Viktor Nagy (Sheikh) are passable.

Songs are disappointing and it’s not something that the layman would hum. The title song and ‘Namonishan’ are well shot. ‘So Ja Re’ is sweet but is played too many times in the film. Dhruv Ghanekar’s background score is exhilarating.

Tetsuo Nagata’s cinematography is quite splendid in the action and long shots. The film looks quite stylish thanks to the camerawork. Sea Young Oh, Hitz International Action Specialists and Parvez Shaikh’s action is gory at times but very well executed. Jyoti Tulsyan and Shravan Ravikant Patil’s production design is rich. Sheetal Iqbal Sharma’s costumes are quite glamorous, especially the ones worn by Kangana and Divya. Futureworks Media’s VFX is fine. Rameshwar S Bhagat’s editing is nothing special.

On the whole, DHAAKAD is all style and no substance and fails to deliver entertainment value. At the box office, it will be rejected due to the strong competition, adult certification, and a lack of storyline.