Due to a bizarre narrative and poor writing LIGER fails to impress.

LIGER is the story of a born fighter. Liger (Vijay Deverakonda) shifts to Mumbai with his mother Balamani (Ramya Krishnan) from Banaras and both start running a tea stall. However, their real intent in shifting to the city is to meet Christopher (Ronit Roy). He runs a Mixed Martial Arts (MMA) training centre. Balamani requests Christopher to train Liger, that too for free. Christopher rejects the demand at first. But Balamani reminds him that Liger is the son of Lion Balram, a famous fighter who had defeated Christopher in 2004 and who later died. She also insists that since she is unable to afford his fees, Christopher can hire Liger as his servant. Christopher agrees but under two conditions – firstly, Liger should not lose focus, and secondly, he should not run behind women. Liger agrees. Christopher soon realizes that Liger is an expert fighter and can fulfil his father’s wish of winning the national championship. However, Liger bumps into Taniya (Ananya Panday) and both begin a romantic relationship. Liger has a heavy stammer and he fears that Taniya might not be aware of it. Hence, once, when they are partying in a pub, Liger confesses to her. But Taniya, in an inebriated state, tells Liger that she doesn’t mind his stammering. Meanwhile, Taniya and Balamani one day get into a fight. Balamani gets the shock of her life when she realizes that Liger is in love with the girl whom she hates the most. Even Christopher admonishes him. Liger is so crazy in love that he doesn’t pay heed. When Taniya tells him to elope, to which, Liger readily agrees. He breaks into her house and runs with her. Taniya’s brother and fellow MMA championship aspirant Sanju (Vishu Reddy) chases them and confronts Liger. Sanju expresses shock that Taniya fell for a man who can’t even speak fluently. This is when Taniya realizes that Liger stammers. Though Liger had told her the truth, she was so sloshed that she didn’t remember. Hence, she dumps him. What happens next forms the rest of the film. 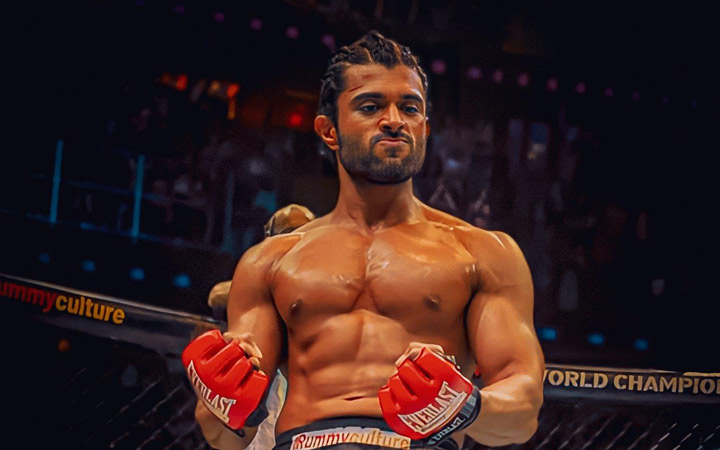 Puri Jagannadh’s story (co-written by Karan Thatavarthy, A R Sreedhar) is clichéd. There have been many such underdog sports films in the past and LIGER offers nothing new in this regard. Puri Jagannadh’s screenplay is intended to be massy and commercial. A few scenes here and there are well thought out. But overall, the film is peppered with very silly moments, and the writing nosedives in the second half. Prashant Pandey’s Hindi dialogues are okay.

Puri Jagannadh’s direction is not up to the mark. To give credit where it’s due, he has handled a few scenes well like Liger’s intro fight, Taniya sneaking into Liger’s home, Liger’s first fight with Chirstopher’s MMA trainers and Liger’s fight on the train. But the scenes in the rest of the film don’t impress as they are not well etched or are plain bizarre, like Taniya not realizing that her boyfriend has a stammering condition. In places, Puri even leaves gaps and straight away jumps the narrative. A few scenes are such that viewers would wonder how they got approved.

LIGER starts on an intriguing note and with stylishly presented opening credits. A few opening scenes are fine but as mentioned above, the poor direction spoils things. For instance, the police station scene is never shown after the local train sequence. Secondly, how did Liger break into Taniya’s house and escape with her is simply implied but would have had a better impact if it was depicted. On the other hand, audiences are bewildered when Christopher slams Sanju for not having ethics. However, Christopher’s own student started the fight with Sanju’s men by flashing the middle finger! Then the scene where Taniya alleges that Liger is being a drama queen would leave viewers astonished as she is the one who left him. The intermission point will also shock the audience for its senselessness. Though there’s a reason why Taniya dumps Liger and that is unveiled later on, it still doesn’t make for a convincing watch. One hopes for the film to get better in the second half. Sadly, it’s so bad that viewers would realize that the first half was better. The way Liger wins the national championship and then even reaches international shores to fight the international league seemed like a cakewalk. The last act, involving Taniya’s kidnapping and the scene with Mark Anderson (Mike Tyson), is unimpressive. The fight scene with the women fighters served no purpose. The film ends on an abrupt note as Liger forgets about winning the international championship after he meets Mark Anderson.

Vijay Deverakonda has put in a lot of hard work. He looks quite dashing and tries to rise above the script. Ananya Panday is given to play a very childish character. Ramya Krishnan is okay but she is seen shouting in the film a lot, and for no reason. Mike Tyson is strictly okay in the cameo. Ronit Roy leaves a mark. Vishu Reddy is over the top as the typical villain. Ali (Ali bhai) is average. Makarand Deshpande is too loud. Chunky Panday is fine. Getup Srinu (Ganpath) is funny.

The music doesn’t work as it’s not of chartbuster variety. ‘Aafat’ is the most memorable of the lot followed by ‘Waat Laga Denge’. ‘Manchali’ is well picturized. ‘Akdi Pakdi’ and ‘Coka 2.0’ are forced into the narrative. ‘Attack’ is relegated to the background. Sunil Kashyap’s background score has a commercial feel.

On the whole, LIGER fails to impress due to its silly and bizarre narrative and poor writing. At the box office, it will have a tough time attracting the audience to cinemas.

How Do I Approach for Much more Than Just one EV In the Foreseeable future?