‘This jawline during pregnancy. Kamaal hai Alia Bhatt’; Arjun Kapoor cannot stop raving about Darlings actress and we agree with him. Arjun Kapoor is one of the wittiest actors in Bollywood and his comments on mostly every actor’s posts often grab eyeballs, especially Alia Bhatt and Ranveer Singh. Alia Bhatt is busy with the promotions of her film Darlings and giving major style goals in her pregnancy. Arjun Kapoor is in awe of her and cannot get over the jawline she has during her pregnancy days. Recently, Alia shared a picture in a plain white shirt paired with blue denim, and the Ek Villain Returns actor cannot let his eyes off Alia’s jawline. He dropped his comment on Alia’s post praising her jawline. 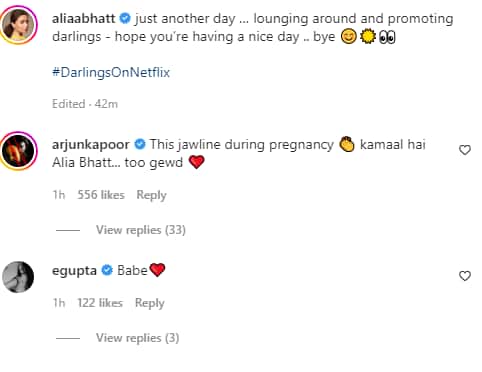 Even Alia Bhatt‘s fans can not stop going gaga over the pregnancy glow. The girl is glowing and is going places. She is here to conquer and how. Take a look at how gorgeous Mrs. Kapoor is looking in her latest pictures.

Alia Bhatt announced her pregnancy just a few weeks ago by sharing the sonography monitor with heart emoji on it and wrote, ” Our baby .. coming soon.”

Alia Bhatt and Ranbir Kapoor got married after dating for five years on April 14, 2022, and within three months of their marriage, the couple announced their pregnancy and this led to a lot of criticism and trolling. Well, Alia and Ranbir Kapoor gave it back to the trolls in the classiest way possible. Right now the couple are gearing up for the release of their first film together Brahmastra. After Darlings, Alia and Ranbir will kick start the promotions of their film together. and fans cannot wait to witness Mr and Mrs Kapoor together.