make it to the end
HomeTechnologyGadgets not lasting as long as you would like them to? Welcome...
Technology

Gadgets not lasting as long as you would like them to? Welcome to planned obsolescence – Down To Earth Magazine

Do  you feel that your electronic products are not lasting like they used to? What if I tell you that they are designed not to last long? Enter the concept of planned obsolescence.
Planned obsolescence is a trick used by companies to turn you into a repeat customer, with or without your knowledge. The idea of planned obsolescence is not new; it was first written about in 1928 by the American marketing pioneer Justus George Frederick.
He stated that it was necessary to induce people to buy an ever increasing variety of things, not in order to use them but to activate commerce and discard them after a short period. Producers and manufacturers of electronics use planned obsolescence to increase consumerism in a variety of ways.
As far as hardware is concerned, the tricks used by companies are to use inferior parts designed to decrease the life of a product to 2-3 years. Some products are inherently designed to make repair difficult or even impossible, for instance the use of glues that make opening up the case non-viable or use of special screws that cannot be opened with the help of a universal screw-driver.
In terms of software, products are designed to lose functionality by excluding them from the software/ operating systems upgrades. This keeps your device physically functional, but does not support applications that are programmed to be compatible only with the latest set of upgrades, forcing you to discard your fully functional device.
The concept of planned obsolescence, which leads to an increase in electronic-waste, is particularly dangerous today because electronics is the world’s largest and fastest growing industry and is increasingly finding applications in all sectors of the economy.
With work-from-home becoming the norm during the pandemic, there has been a huge increase in the number of people who have invested in a new gadget for work or for leisure. India’s share in global hardware electronics production is about 3 per cent. The share of domestic electronics production in India’s g,ross domestic product is 2.3 per cent.
The National Policy on Electronics (NPE) 2019, envisions positioning India as a global hub for electronics system design and manufacturing. The electronics production in India has increased from Rs 1,90,366 crore in 2014-15 to Rs 5,33,550 crore in 2019-20 at a compound annual growth rate of 23 per cent. 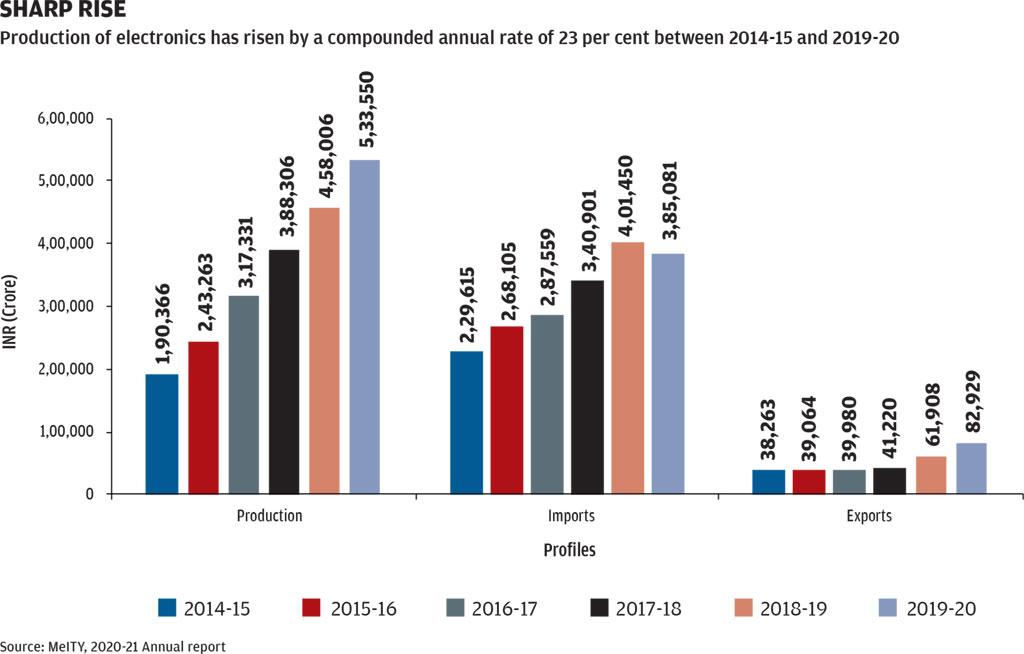 A handful of schemes have been introduced in NPE 2019 aimed at boosting the domestic production of electronics in India. These include production-linked incentive scheme (PLI), which extends an incentive of 4-6 per cent to eligible companies on incremental sales (over base year 2019-20) of manufactured goods, including mobile phones and specified electronic components.
Scheme for promotion of manufacturing of electronic components and semiconductors (SPECS) which provides a financial incentive of 25 per cent on capital expenditure for the identified list of electronic goods.
It is interesting to note that the Ministry of Electronics and Information technology (MeITY), identifies seven different categories in its production profile that include: Consumer electronics, industrial electronics, computer hardware, mobile phones, strategic electronics, electronic components and light emitting diode products.
Electronic waste, on the contrary, is broadly divided into two categories, listing a total of 21 electrical and electronic equipment (EEE) as per the schedule I of the E-waste Management Rules 2016. These includes information-technology equipment and consumer electronic goods.
One of the key concerns in the electronics with respect to waste management is mobile phones. India has become the second-largest mobile phone manufacturing nation in terms of volume.
India is also the world’s second largest smart phone market. Domestic production of mobile phones in India has gone up from 60 million units in 2014-15 to 330 million units in 2019-20, the year when the domestic production of mobile phones was more than the domestic demand. In India the ownership of mobile phones in the third quarter of 2020 was much higher than any other digital device. 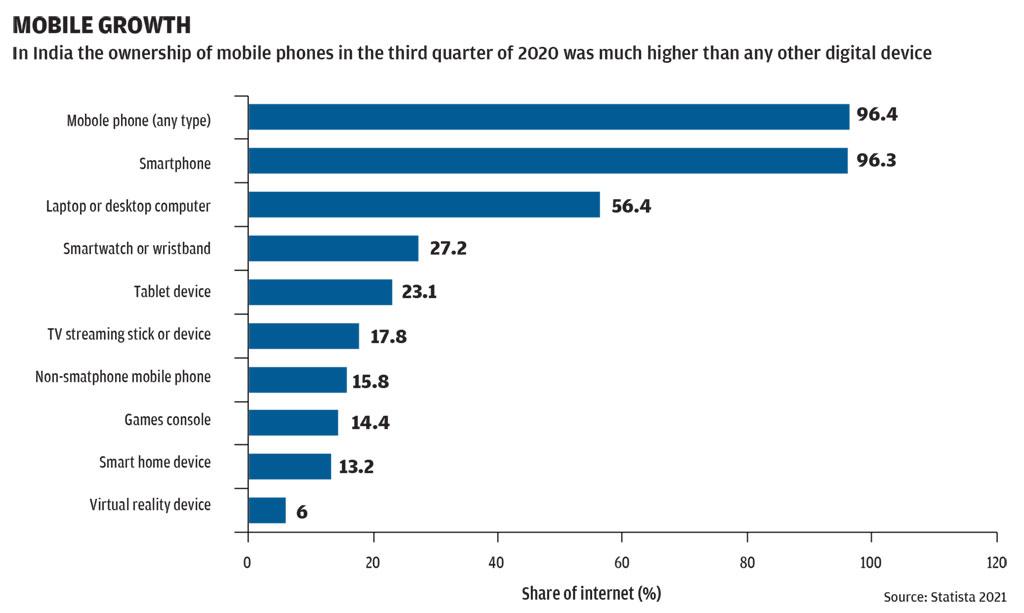 Mobile phones, unlike any other EEE have a shorter life. This means that they get discarded more often as compared to other EEE. One part of the problem is consumers who are easily persuaded that the device that are currently using is not as good as the latest one.
We can agree that in the last decade and a half, the average life of a mobile phone has gone down by approximately five times.
The shorter lifespan of many consumer electronics comes at a steep environmental cost. A 2018 study by the McMaster University in Hamilton has found that 85 to 95 per cent of carbon foot print is not caused by the use of the device but rather its production.
Changing devices frequently will have an exponentially huge impact on the carbon footprints.
A 2017 Greenpeace USA report on greener electronics says this about planned obsolescence “Faced with market saturation for their devices in many countries, companies across the sector have increasingly changed the design of their products in a way that accelerates the replacement cycle by, making them difficult to service or upgrade, shortening the useful life of otherwise functional devices.”
Greenpeace found that among 40 best-selling gadgets, it was difficult or impossible to replace commonly failing parts, such as the battery or display in nearly 70 per cent.
It also noted a trend among LG and Samsung toward making phones less repairable; efforts by Apple and Sony to block environmental standards to encourage the design of devices that are easier to repair, upgrade and disassemble for recycling; and said tablets and laptops design by Microsoft often require damaging the device to access it for repairs.
Reparability has never been much of a concern for a country like India. Traditionally, a lot of what we used was repaired time and again before it could not be repaired any further.
Unfortunately, this tradition is getting forgotten in the newer generation of consumers, due to the lifestyle changes, higher disposable incomes and changes in the product design that are made to last for shorter time and with a poor reparability index.
More than consumers, the companies manufacturing these products for obsolescence and government policies who let these companies introduce such products in the market are a bigger problem. Modern times call for competent policies that are relevant to the issues faced by the consumers and the environment.
For instance, some countries have introduced policies that improve the ‘Right to Repair’ for consumers. The new European Union rules, entering in force from 2021, require appliance manufacturers to supply spare parts for a period of 10 years.
Sweden has slashed the repairing taxes by more than half to encourage people to repair rather than buy new products. France has passed a law that requires products put on the market to have a label indicating the reparability index of the product.
One more aspect that can be explored for ensuring channelisation of end-of-life products to the right destination is the introduction of electronics as a service rather than as a product.
Companies rent out products to consumers, who use them for the desired period of time and can return them back to the manufacturer, who can then rent it to other consumers who may be interested in the product.
This solves two problems, the supply chain problem as the product (while working or after its end of life is reaching the manufacturer), and the electronic waste problem — as the secondary raw materials from the end of life electronic product can be utilised in manufacturing a new product. This will also encourage brands to make products with a higher reparability index and optimise their processes to include secondary materials from urban mines.
Incentivising consumers for not buying electronics frequently or think before they buy and incentivising businesses for making robust products that have a longer mean service life will go a long way in dealing with the issue of electronic waste which is termed as the fastest growing stream of waste, globally.
This was first published in Down To Earth’s annual State of India’s Environment 2021 report.
We are a voice to you; you have been a support to us. Together we build journalism that is independent, credible and fearless. You can further help us by making a donation. This will mean a lot for our ability to bring you news, perspectives and analysis from the ground so that we can make change together.
Comments are moderated and will be published only after the site moderator’s approval. Please use a genuine email ID and provide your name. Selected comments may also be used in the ‘Letters’ section of the Down To Earth print edition.
Down To Earth is a product of our commitment to make changes in the way we manage our environment, protect health and secure livelihoods and economic security for all. We believe strongly that we can and must do things differently. Our aim is to bring you news, perspectives and knowledge to prepare you to change the world. We believe information is a powerful driver for the new tomorrow.
© Copyright Down To Earth 2022. All rights reserved.

So Much Tech. So Few Winners. – The New York Times

Should toddlers look at screens? Make a technology plan early. – The Washington Post