Here's What the iPhone 13 Lineup Will Look Like – MacRumors

Apple’s 2021 iPhone models aren’t expected to launch until September, but thanks to rumors, CAD drawings, and renderings, we already know what to expect. Dummy models are now circulating, and we got our hands on a set to give MacRumors readers an overview of the leaks that we’ve been seeing for months now.

We have dummy models of the iPhone 13, ‌iPhone 13‌ mini, iPhone 13 Pro, and ‌iPhone 13 Pro‌ Max, and mockups like these are often created for case manufacturers. There’s a lot of money in being first to release a case for a new device, with dummy models created based on specifications and details that leak from Apple’s manufacturing partners. 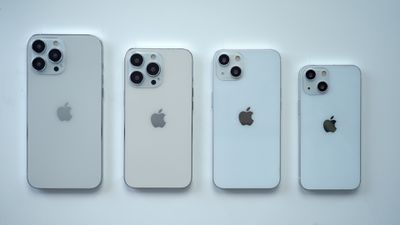 In our experience, dummy models are most often accurate and are generally reliable representations of new devices that Apple plans to release. These dummy models in particular appear to line up with many of the rumors that we’ve heard about the new iPhones. That said, there’s always a possibility that some of these design tweaks and changes could be off.
We’re not expecting any major design changes this year, and the dummy models look similar to the iPhone 12, 12 mini, 12 Pro, and 12 Pro Max, coming in the same sizes. We may see some very small differences in thickness in some of the models, but for the most part, the ‌iPhone 13‌ lineup will look a lot like the ‌iPhone 12‌ lineup.

Apple is rumored to be cutting down on the size of the notch in the ‌iPhone 13‌ lineup and there are changes that are noticeable on the dummy model. The microphone has been relocated to the top bezel of the device, which is perhaps the design change that will allow for a slimmed down front-facing camera module. The dummy models are designed for case makers and don’t have an accurate display setup that demonstrates notch size, so we have to rely on rumors for that.
The general body design may be the same, but there are notable changes to some of the camera designs. Apple is introducing some new camera features, such as Sensor-Shift Stabilization across the ‌iPhone 13‌ lineup as well as improvements for the ‌iPhone 13 Pro‌, so the rear camera setups of these dummy models are not identical to the ‌iPhone 12‌ lineup.

The ‌iPhone 13 Pro‌ Max looks nearly identical to the iPhone 12 Pro Max, though the camera bump is a bit larger. The dummy model has different lens sizes with slightly larger lenses, but other than that, there are no changes. Case makers don’t necessarily need spot-on lens size accuracy for developing a case, but there could be some changes to the lenses as some camera upgrades are expected.
As for the ‌iPhone 13‌ and ‌iPhone 13‌ mini, Apple is rearranging the camera lenses into a diagonal layout that features a flash at the top right of the camera module and a microphone at the bottom left, with the Wide and Ultra Wide lenses positioned diagonal to one another. This may be a change introduced to support the rumored Sensor-Shift Stabilization feature, which is currently limited to the Pro models.

The dummy models suggest the ‌iPhone 13‌ will feature a repositioned SIM tray and slight changes to the location of the volume buttons, while the SIM tray may be slightly shifted on other models.
We may not be getting major design changes this year, but Apple is rumored to be adding improved 5G, a faster A15 chip, and a 120Hz ProMotion display for Pro models, so there’s still a lot to look forward to in the ‌iPhone 13‌ lineup.