Fahmaan Khan and Sumbul Touqeer’s chemistry in the TV show Imlie is being loved by one and all. After Gashmeer Mahajani’s exit Fahmaan has taken over the show as the male lead very well, and Aryan and Imlie’s love-hate relationship has kept the audiences hooked to their TV screens. When two actors share great onscreen chemistry, we often hear rumours of them dating in real-life, and the same has happened with Fahmaan and Sumbul. There were rumours that they are dating in real life, however, the actors’ recent Insta story clears that they are ‘just friends’.

Recently, Sumbul took to Instagram to praise Fahmaan’s performance in the show. She posted, “Fahmaan Khan you are a firecracker. Kya perform kiya hai meri jaaannnn!!!! I love your paagalpan towards your craft. Proud of you my just friend.” Fahmaan replied and wrote, “Aray wah just friend aaj tareef pe tareef. Thank you so much.” 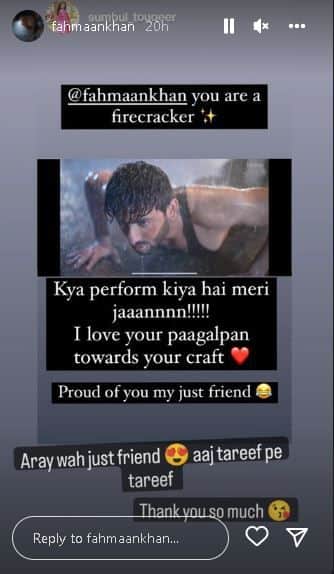 The way the two have emphasized the word ‘just friend’, it looks like the actors actually wanted to clear the air about them being in a relationship. Well, it will be interesting to see how their fans would react to this ‘just friend’ thing.

Meanwhile, Imlie is set for a leap, and everyone is looking forward to new twists and turns in the show. With Malini’s (Mayuri Deshmukh) re-entry into the show, the audience is expecting a lot of drama.

After Gashmeer Mahajani’s exit Manasvi Vashist was roped in to play the role of Aditya Kumar Tripathi. But, after a few weeks, the actor left the show, and his track was totally taken out from Imlie. Right now, Aditya and his family are not seen in the show, and the focus is on Imlie, Aryan, and Malini. It will be interesting to see the audience’s response to the show after the leap.