Bollywood actress Kangan Ranaut recently claimed that Mr. perfectionist Aamir Khan has himself started the trend of boycotting his upcoming film Laal Singh Chaddha. The upcoming film is an official Hindi remake of the 1994 Hollywood film Forrest Gump which starred Tom Hanks in the lead role. Currently, fans are calling out Laal Singh Chaddha and want the film to boycott. Kangana took to her Instagram story and wrote “I think all the negativity around the upcoming release Laal Singh Chadda is skillfully curated by mastermind Aamir Khan Ji himself. This year, no Hindi films have worked (barring one exception of a comedy sequel) only south films deeply rooted in Indian culture or with local flavour have worked. A Hollywood remake would have not worked anyway.” She further added saying, “But now they will call India intolerant, Hindi films need to understand the pulse of audiences it’s not about being a Hindu or Muslim. Even after Aamir Khan ji made Hinduphobic PK or called India intolerant, he gave the biggest hits of his life. Please stop making it about religion or ideology. It takes away from their bad acting and bad films.” 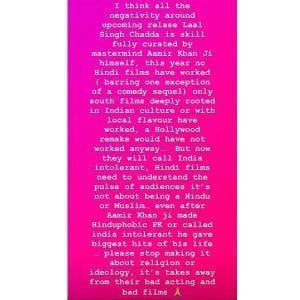 Laal Singh Chaddha will release on August 11 and internet users have been boycotting the film using the hashtag – #BoycottLaalSinghChaddha. Recently, Aamir requested netizens to not boycott his film. He said that he feels sad as a lot of people who are saying to boycott the film believe that he doesn’t like India. He even said that it is untrue as he loves his country a lot. For some time now, few Bollywood films have stopped working. Bhool Bhulaiyya 2, The Kashmir Files, and Gangubai Kathiawadi created a storm at the box office. Talking about Laal Singh Chaddha, Kareena and Aamir have reunited for the film. This is their third collaboration post-Talaash and 3 Idiots. Laal Singh Chaddha is directed by Advait Chauhan and also features Mona Singh and Naga Chaitanya in pivotal roles.

BTS: After huge uproar, Indian online teacher apologizes for threatening behaviour towards fans of the K-Pop band; ARMY say, 'Your words are not genuine'