Katy Perry and Orlando Bloom have been together for years and even welcomed a daughter together in August 2020.

Bloom was previously married to Miranda Kerr from 2010 to 2013, and they share a son Flynn. Meanwhile, Perry was married to Russell Brand from 2010 until 2012.

Perry and Bloom are currently going strong, but they’ve had their relationship ups and downs over the years. Take a look at their full relationship timeline.

The “Firework” singer and the “Pirates of the Caribbean” actor sparked romance rumors after they were spotted “aggressively flirting” at a Golden Globes party.

“He wouldn’t stop staring at her cleavage — and she was very flirty and laid on the charm,” the insider told Page Six at the time.

A mutual friend seemed to confirm the romance weeks later when they posted a group selfie that featured Perry and Bloom hanging out at the play “The Absolute Brightness of Leonard Pelkey” in Los Angeles.

Their romance escalated over the next few months, as they were seen packing on the PDA at Coachella.

“Orlando was behind her and swaying with her to the music,” a festival-goer told E!. “They also were vaping together. They were kissing and very much a couple.”

Perry and Bloom marked a major milestone when they went Instagram-official.

The “E.T.” songstress posted a photo of her and her new beau laying in robes on the steps of Cannes’ Hotel du Cap-Eden-Roc.

“we cannes’t,” she captioned the pic.

The couple faced yet another milestone when they were photographed paddleboarding together in Italy – all the while Bloom was infamously nude while paddling behind a clothed Perry.

The actor’s nude photos sent the internet into a frenzy theorizing on how lucky of a girl Perry was.

“I wouldn’t have put myself in that position if I’d thought it would happen,” Bloom later told Elle UK in May 2017. “I’ve been photographed a million times in a million ways. I have a good radar.”

Perry also recently reacted to the viral photos, and she wasn’t complaining.

A year of firsts!

The lovebirds showed their political alliances by dressing up in a couple’s costume as none other than Bill Clinton and his wife – former Democratic presidential nominee – Hillary Clinton one week before the 2016 election.

The duo faced their first snag in their relationship when they split after 10 months of dating.

“Before rumors or falsifications get out of hand we can confirm that Orlando and Katy are taking a respectful, loving space at this time,” their reps told Page Six at the time.

Perry and Bloom didn’t totally call it quits after all, since they were spotted getting their groove on at an Ed Sheeran concert in L.A.

Several concert-goers took to Twitter to rave about how they were “kissing” and she was even “sitting on him” at one point.

The rekindling rumors only escalated after eagle-eyed fans once again took to social media to share photos of the two grabbing a bite to eat while on vacation at the Amilla Fushi Resort in the Maldives.

Despite being “Hot N Cold” for the last 11 months, the couple had officially returned to hot status again.

“Katy wants to make things work this time around,” a source told The Sun at the time. “She tried, but she couldn’t cut him off. She cares too much about him. This time, they’re keeping things low key — but they’re back together.”

Perry somewhat confirmed the romance when she commented under a shirtless photo Bloom posted showing off his abs.

“Oh hey! I was actually looking for a washboard to do me laundry on,” she commented.

Once again, Perry teased that she was back on with Bloom when she told Entertainment Tonight that she has “been spoken for and speak for myself. And I’m very happy!”

After long last, the couple solidified their relationship by making their red carpet debut at the Global Ocean Gala hosted by H.S.H. Prince Albert II of Monaco at Opéra de Monte-Carlo.

After a quiet few months of romantic bliss, the couple shared the exciting news that they were engaged.

“full bloom,” Perry captioned a selfie of them showing off her massive engagement ring in the shape of a flower.

Bloom posted the same selfie but captioned the snap, “Lifetimes.”

The “American Idol” judge rung in her 35th birthday by flying 64 of her closest friends and family – including Bloom of course – to Egypt for 10 days.

Perry treated her guests to cruising down the Nile, riding camels through the desert and watching the sun rise over the Pyramids.

Perry graced the cover of Vogue India where she gushed about Bloom.

“I have a partner who is also all about finding a balance — Orlando, who is on a spiritual journey of his own,” Perry said. “He’s an anchor who holds me down, and he’s very real.”

She added that the two “hold each other accountable” and “pull the poison out of each other” in a “never ending cleanse.”

“I’ve never had a partner who was willing to go on an emotional and spiritual journey like Orlando,” she said, adding that defines love as “partnership, friendship, truth and being an absolute mirror to someone.”

Later that month, Perry compared Bloom to the making of the Pyramids in a sweet 43rd birthday tribute.

“I am in constant awe and wonder of how such a loving/kind/compassionate/supportive/talented/deeply spiritual/did I mention incredibly good looking/James Bond of a human being can actually exist in the flesh!” she captioned a photo of him standing in front of one of the Seven Wonders of the World. 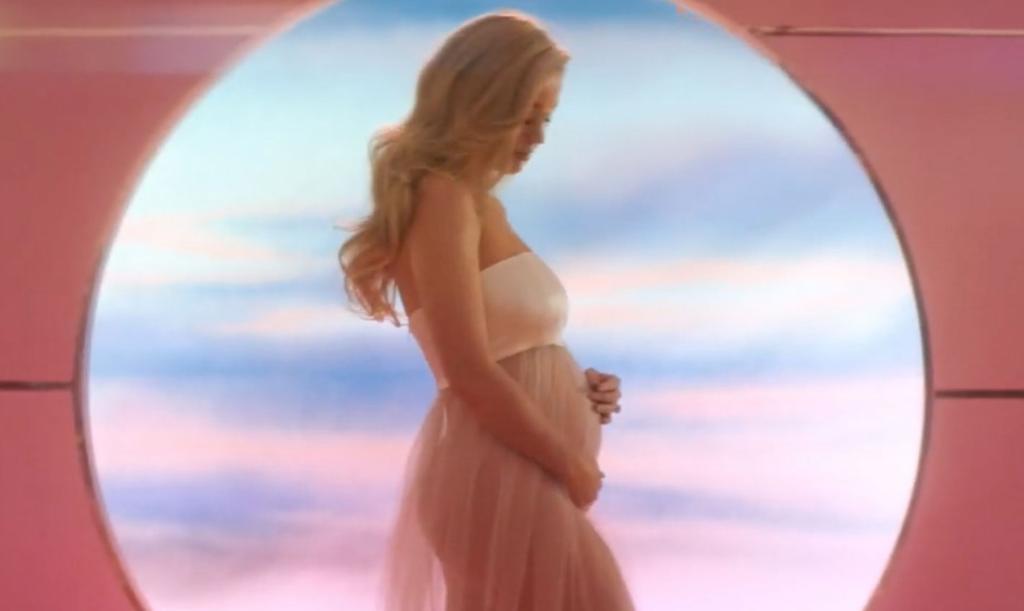 Perry excitedly announced she was pregnant with her first child, Bloom’s second. 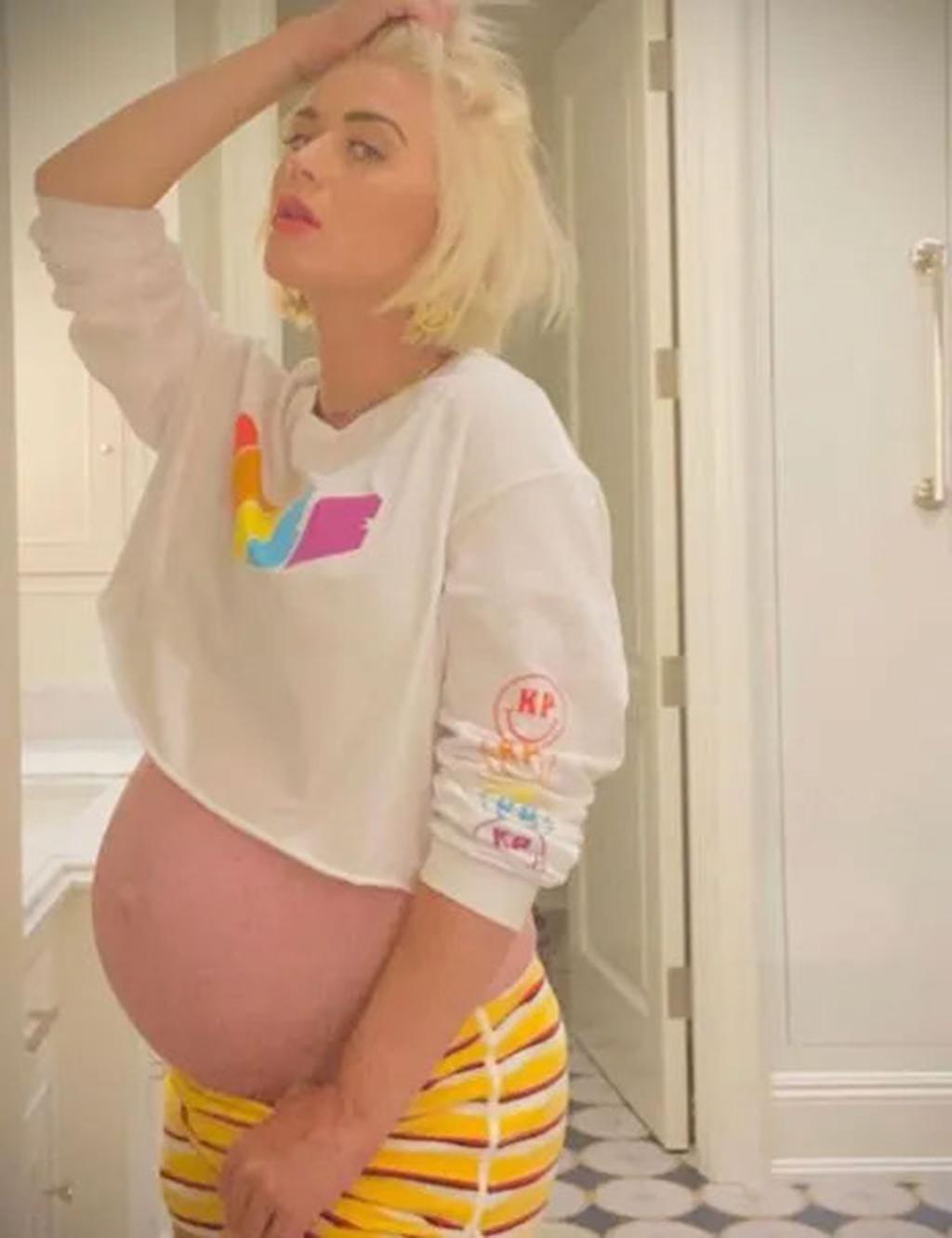 Perry excitedly announced she was pregnant with her first child, Bloom’s second.

Hilton admitted that she was “frustrated” with a manager at…

The “Dark Horse” singer announced that she and Bloom were expecting their first baby in March 2020.

Perry debuted her baby bump at the end of her music video “Never Worn White” and later confirmed the news on an Instagram Live.

“There’s a lot that will be happening this summer; not only will I be giving birth — literally — but also figuratively to something you guys have been waiting for,” Perry shared.

Page Six also reported that same month that the couple was planning a summer wedding in Japan, had to postpone the nuptials because of the emerging COVID-19 pandemic.

Perry shared that after a messy sex reveal – featuring some sort of pink whipped cream on Bloom’s face – that their first child would be a baby girl.

The Grammy nominated singer admitted she was near suicide during her initial split with Bloom and after her album “Witness” was met with mixed reviews in 2017.

“But the validation did not get me high, and so I just crashed,” she told CBS Radio. “It wasn’t that huge maybe from an outside perspective, but for me, it was seismic.”

Perry and Bloom announced in late August that they had welcomed baby Daisy Dove Bloom.

“We are floating with love and wonder from the safe and healthy arrival of our daughter,” they wrote in a statement to UNICEF. “But we know we’re the lucky ones and not everyone can have a birthing experience as peaceful as ours was.”

The family grew from three to four after they fostered and later adopted a dog named Buddy. The new addition came four months after his beloved dog Mighty died. 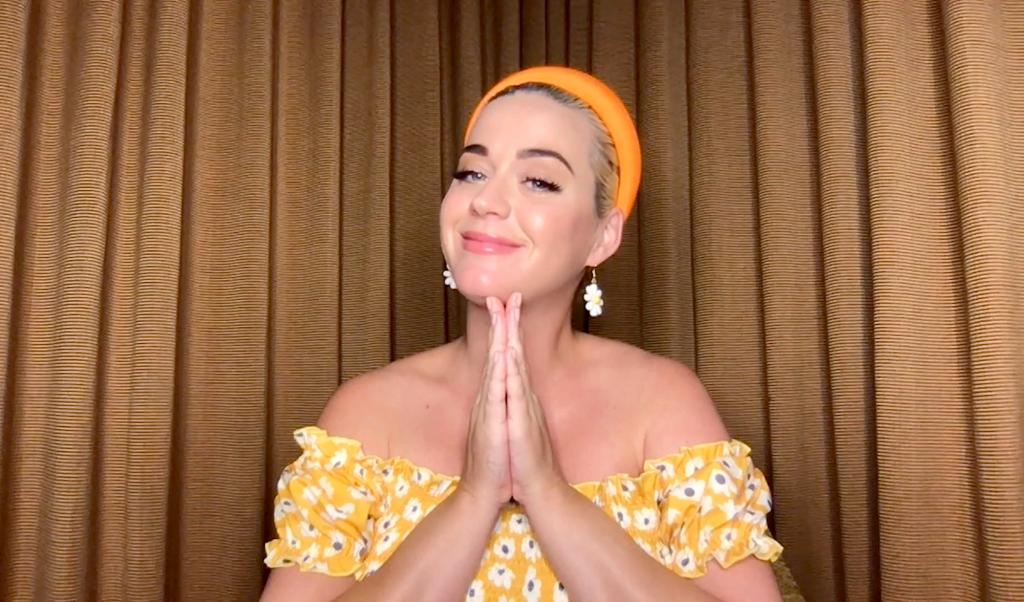 The couple took a lengthy family vacation to Hawaii in early 2021. 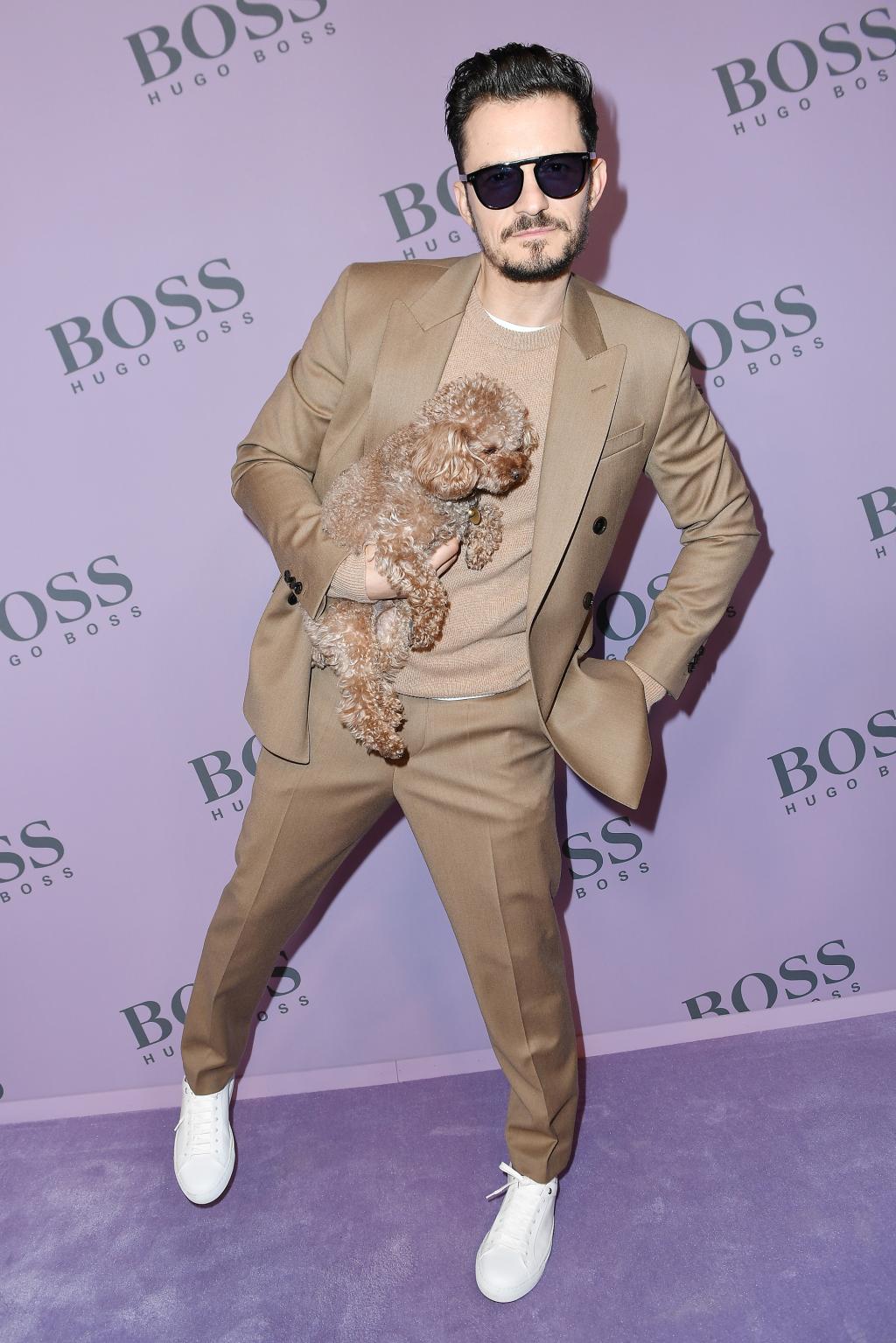 The couple took a lengthy family vacation to Hawaii in early 2021.

Hilton admitted that she was “frustrated” with a manager at…

The couple sparked marriage rumors after Page Six exclusively published photos of Perry wearing a gold band on her left ring finger while enjoying a family vacation in Hawaii.

The couple took a break from parenting to make their onscreen debut together for a short film titled “Transmissions From the Future,” a video promoting the voting rights For the People Act.

Perry and Bloom dressed up as an older couple fighting for their freedom in a 2055 dystopian future. In addition to encouraging people to “save democracy,” they also gave a sweet shoutout to Daisy.

Miranda Kerr had nothing but lovely things to say about her ex-husband’s fiancé.

“I love her. I mean, it’d be safe to say that I love her more than Flynn’s dad,” Kerr said on the “Moments with Candace Parker” podcast, adding that she now sees Bloom as a “brother.”

The couple walked the red carpet at the Variety’s Power of Women event, but they stole the show later on when Perry requested Bloom’s help to undo her tight corset so she could sing.

“Pull it all the way down, I have a girdle in here,” Perry told Bloom, as the crowd watched on and cheered. “All the way down. OK, now I can breathe.”

Perry kicked off her Las Vegas Residency and Bloom was by her side – literally – to support her.

“There’s a new act on the #vegas strip @katyperry so proud of you. Let’s all go #play 🍄🚀 HNY❤️,” Bloom captioned a photo of him in front of Perry onstage.

Perry shut down rumors that the two had secretly eloped and explained on the “Kyle and Jackie O Show” that they were “still trying for it to work out” at their “destination location.” She blamed COVID for the delay.

The mom of one explained how seeing “what a great dad he [Bloom] was” to son Flynn “influenced” her maternal instincts to “breed” a child with him.

“That definitely primally influenced me,” Perry gushed in a “Dear Chelsea” podcast episode. “Something inside of me said, ‘You, mid-30s, this man is nice. Must breed.’”

The family of three showed how happy they currently are while celebrating Perry’s 38th birthday together on Oct. 25.

“every time i blow a candle out i always wish for you. 38 and grateful ♥️🎂,” she captioned a sweet snap of their three hands on top of one another.

Bloom also gushed about his love with a selfie of just the two of them.

“Each time we take a trip around the sun and get to celebrate you, I’m reminded that on this journey together and whatever the weather I’m always smiling 🎂❤️🎉,” he captioned the pic.