MAVERICK keeps the spirit of the 1986 release alive, while giving viewers an experience unlike most CGI & VFX heavy films.

36 years ago, the film TOP GUN hit screens, starring a young Tom Cruise as Captain Pete ‘Maverick’ Mitchell and Val Kilmer as Tom ‘Iceman’ Kazansky, the film was one of the first big screen presentations that feature aerial combat. Aiding the visuals in the 1986 release was the sound track comprising of songs like, ‘Danger Zone’, ‘Take My Breath Away’, ‘Great Ball Of Fire’ and of course the ‘Top Gun Anthem’, that even today can be heard as classics. Now 36 years on, we see a sequel to the film gearing up to hit screens, but will TOP GUN: MAVERICK bring back the tension and awe inspiring visuals that were witnessed 36 years ago, or will the film be just another run of the mill action entertainer is the question. 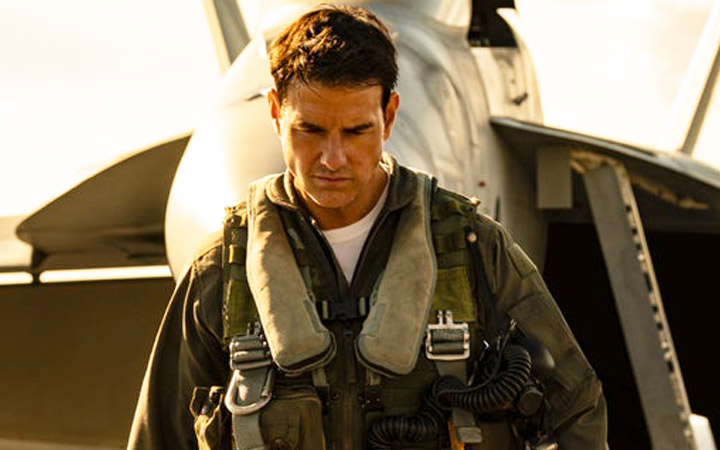 TOP GUN: MAVERICK starts with test pilot Captain Pete ‘Maverick’ Mitchell (Tom Cruise), who has purposely dodged advancement in rank to continue flying after 36 years of service. One day, Maverick is summoned to be put in charge of training a group of Top Gun graduates for a specialized mission under the orders of his former rival, Admiral Tom ‘Iceman’ Kazansky (Val Kilmer), who is the commander of the U.S. Pacific Fleet. Among them is Lieutenant Bradley ‘Rooster’ Bradshaw (Miles Teller), the son of Maverick’s late best friend and RIO Nick ‘Goose’ Bradshaw. When Maverick arrives, he is told by his commanding officers that the elite group of Top Gun pilots has been assembled for a special mission against a nameless hostile mountainous nation that has started to make facilities for enriched uranium. The assembled team under Maverick is ordered to pre-emptively destroy the uranium facility in spite of its highly peculiar location deep inside a mountainous canyon protected by multiple SAM sites surrounding it. Maverick meets the team of elite pilots, who greet him coldly. One of them, Jake ‘Hangman’ Seresin (Glen Powell), cynically keeps his distance from the other pilots, including Maverick. There is high tension between Maverick and Rooster when they meet, which at times breaks out into vented hostility and an almost-fistfight between Hangman and Rooster. When the training begins and the pilots see Maverick’s skills while flying during training dogfights, the other pilots begin to re-assess their scepticism about Maverick and most of them grow to appreciate Maverick’s talent for air combat. Maverick presents a mission plan to the high command and tells them that he recommends a mission of two F/A-18 Hornets, each with a separate F/A-18E/F Super Hornet escort. The final pilot crews are assembled and the mission is launched with Maverick in command. Will the mission be successful, with Maverick and Rooster come to terms with their differences, will Rooster and Hangman’s rivalry be their undoing is what makes up the rest of the film.

Right from the start, the viewer is given a glimpse of what the 1986 film was like. From the opening shot detailing the setting over the years, to introducing Maverick and his iconic Kawasaki Ninja gpz900r which became a rage back in the day the viewer is taken through a rapid montage reliving the days gone by. But, this does not hamper the film, in fact, it help establish the base upon which the new film builds. From here, TOP GUN: MAVERICK details the new generation of fighter pilots, and what their objective is, while at the same time putting on display Maverick’s lack of ability to follow orders. Right through the first half the film takes us through the lives and past of the main character viz. Maverick and Rooster, laying bare their emotions. Though this segment might seem slow, director Joseph Kosinski keeps it entertaining with well interspersed humour, action and of course one liners. Towards the end of the first half things begin to pick up pace, with the post interval proceedings keeping the viewer fixed in his seat. With most of the aerial combat sequences and training in the second half of the film, TOP GUN: MAVERICK fast changes pace to become an edge of the seat thrill ride. Much like the first film in 1986, TOP GUN: MAVERICK boasts of some death defying aerial combat sequences that will leave some who suffer from motion sickness a bit queasy. But for the rest who enjoy the thrill of a high speed chase sequence with the prospect of certain death just inches away these sequences are a thrill ride.

A special mention needs to be made for Peter Craig and Justin Marks who have developed the story. While keeping in line with the original 1986 feature film, the duo have done well in maintaining the spirit and thrill in the new film. While in certain portions the on screen proceedings do get a tad overly dramatic, they are few and well executed. Again, director Kosinski rises to the occasion, or interweaving drama with action into a seamless singular story line. However, the high point of the film is the aerial dogfight sequences that will keep you in your seat. With clap worthy displays and well executed death defying stunts these sequences are definitely a must watch. In an age where CGI and VFX have leapt ahead, viewing such action sequences is simply put, something else.

On the flipside, the film doesn’t bore but the first half gets a bit dragging. The second half is nail-biting but quite predictable too. A major plot point in the climax is rather convenient and might be difficult to digest for a section of viewers. Moreover, the content is not exactly massy and hence, the dubbed audiences would not find it exciting enough. 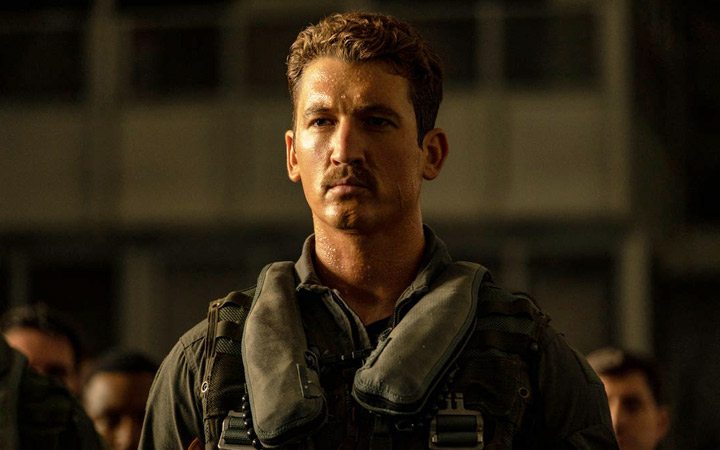 In terms of performances, Tom Cruise, Miles Teller, and Jennifer Connelly, are on point. Each of the three has reprised their roles to perfection. Tom Cruise obviously deserves a separate mention as he’s the face of the film. His performance, as always, is spot on, but what impresses the most is his energy and passion towards his work at this age. In fact, he’s as energetic as he was in the first instalment which was released 36 years ago! Similarly, Val Kilmer, Jon Hamm, Ed Harris, Glen Powell in supporting roles have done a good job. Although one might want a bit more rivalry to be seen between Teller and Powell’s characters, the stage is set for future expansion between the two.

Coming to the music of the film, what made the 1986 film stand out was the impeccable soundtrack that features songs that are today considered cult classics. Taking inspiration from this, TOP GUN: MAVERICK features some of the tracks namely, ‘Danger Zone’, ‘Great Balls of Fire’, and the ‘Top Gun Anthem’ from the original film. However, Berlin’s track ‘Take My Breath Away’ which shot to the top of the charts after release has been replaced by an equally melancholic ‘Hold My Hand’. Apart from these, the film features an interesting background score that adds to the thrill of the aerial combat sequences.

On the whole, TOP GUN: MAVERICK keeps the spirit of the 1986 release alive, while at the same time giving viewers an experience unlike most CGI & VFX heavy films. A hark back to days when stunts were performed and not animated, the film keeps you gripped in your seat. Yet, at the Indian box office, TOP GUN: MAVERICK will face an uphill task posting collections. With competition from previous and new Bollywood releases like BHOOL BHULAIYAA 2 and ANEK, and of course the lack of promotions, the film faces some insurmountable odds.

Shonda Rhimes Recalls Combating to Get Grey’s Anatomy on Television