RASHTRA KAVACH OM is a poor show and will have a very tough time at the box office.

RASHTRA KAVACH OM is the story of a brave, patriotic officer. Om (Aditya Roy Kapur), a RAW agent, is sent on a mission. He has to infiltrate a battleship to find clues to an important asset of the country. While fighting the enemies on the ship, he gets shot. Om survives and Kavya (Sanjana Sanghi), Om’s colleague, is sent to help him recuperate. After being unconscious for several weeks, Om wakes up and realizes that he has lost his memory. He claims that his name is Rishi. Their safehouse gets attacked and hence, both have to train. Om gets flashes of his house in Kasauli. He tells Kavya to take her there. In Kasauli, he locates his childhood home, which has been burnt down. Om finds the picture of his father, Dev (Jackie Shroff), in the house. He shows it to Sanjana and it leaves her shocked for two reasons. Firstly, as per her knowledge and that of others, Om is the son of Jai Rathore (Ashutosh Rana), a senior officer of RAW. The other shocking aspect is that Dev is considered to be a traitor. In 2003, he had designed the best defence system in the world, called ‘Kavach’. As per RAW, he joined hands with India’s enemies and sold ‘Kavach’. Jai Rathore, however, doesn’t believe in this theory. He’s also aware that Om’s real name is Rishi and that he’s not his biological son. What happens next forms the rest of the film. 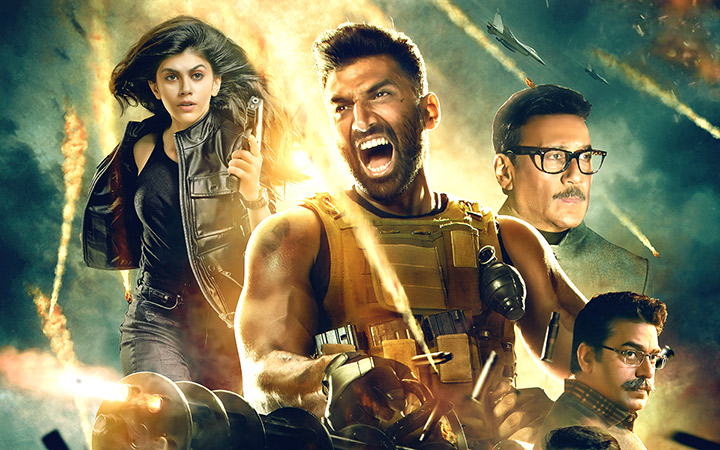 Kapil Verma’s direction is average. To give credit where it’s due, he has handled the action well. A few scenes are deftly executed like Om’s entry, Om and Kavya fighting the baddies in the safehouse and Om chasing the truck in Armenia. An emotional scene which stands out is Yashvi (Prachee Shah Pandya) feeding kheer to Om. On the flipside, the narrative leaves viewers confused as there is too much flashback in the film. The whole setup looks superficial, especially in the first half. Yet, till the intermission point, the film seems decent and one hopes that after the build-up, the film would go higher in the second half. But in the second half, too many childish developments take place. The climax fight gives a déjà vu of the BAAGHI films. In the name of unpredictability, there are multiple twists with regards to the main villain. After a point, it becomes frustrating for the viewers.

Aditya Roy Kapur is quite good. He hasn’t done a full-fledged action role before. Hence, the expectations from him are minimal. But Aditya springs a surprise and appears convincing. Sanjana Sanghi puts up a confident act. Her action sequence in the film’s beginning is entertaining. Ashutosh Rana puts his best foot forward. However, the way he mispronounces ‘memory’ will induce unintentional laughter. Prakash Raj (Moorthy Sahay) is a bit over the top but it works for his character. Jackie Shroff is decent. Prachee Shah Pandya leaves a mark. Vicky Arora (Rohit aka Ro; Om and Kavya’s colleague) and Rohit Chaudhary (Arsalaan Khan) are fine. Vikram Kochhar (Rajat) and Abudhar Al Hassan (Diwan) get no scope. Amitabh Ghanekar (Dr Fountainwala) tries to be funny and fails. Shubhangi Latkar (Vandana) is wasted. Elnaaz Norouzi is hot.

On the whole, RASHTRA KAVACH OM is a poor show and will have a very tough time at the box office.

DWTS: Shangela Performs Tango With Fried Rooster In Her Costume