RUNWAY 34 is the story of a pilot facing a tough time. Captain Vikrant Khanna (Ajay Devgn) is a pilot working for Skyline airlines. On August 16, 2015, he is in Dubai and the next day, he is supposed to fly to Cochin, where he’s also based. Vikrant’s friend Sandy calls him to party at night. Vikrant refuses at first. But then, he gives in. He visits a nightclub in Dubai with his pal and drinks a lot. He reaches his hotel at 6 am and goes to sleep. He wakes up just on time and heads to the airport to fly the Skyline 777 flight from Dubai. His co-pilot is Tanya (Rakul Preet Singh). Both are informed before the flight that Cochin is rocked with heavy rainfall. The flight takes off and when it’s time to land, Vikrant and Tanya face difficulty. The Air Traffic Control at Cochin advise them to instead land at Trivandrum, where the weather is better. Nevertheless, Vikrant tries to land but fails. He then proceeds to Trivandrum. By then, the weather of Trivandrum also deteriorates. For some reason, the Air Traffic Control team at Cochin doesn’t inform Vikrant and Tanya to not head to Trivandrum. By the time Skyline 777 reaches Trivandrum and are apprised of the situation by the Air Traffic Control Team there, it’s too late. They can’t move anywhere else as they are low on fuel. With no other option, the pilots decide to land at Trivandrum airport. The Air Traffic Control staff advises them to land on Runway 16. However, Vikrant insists on landing at Runway 34 which is a risky move according to the Air Traffic Control team. Nevertheless, Vikrant sticks to his plan and with great difficulty, lands on Runway 34 successfully. However, the troubles are far from over. The AAIB wants to investigate if rules were broken in landing the flight. Narayan Vedant (Amitabh Bachchan) of AAIB takes up personal interest and decides to drill Vikrant and Tanya. What happens next forms the rest of the film. 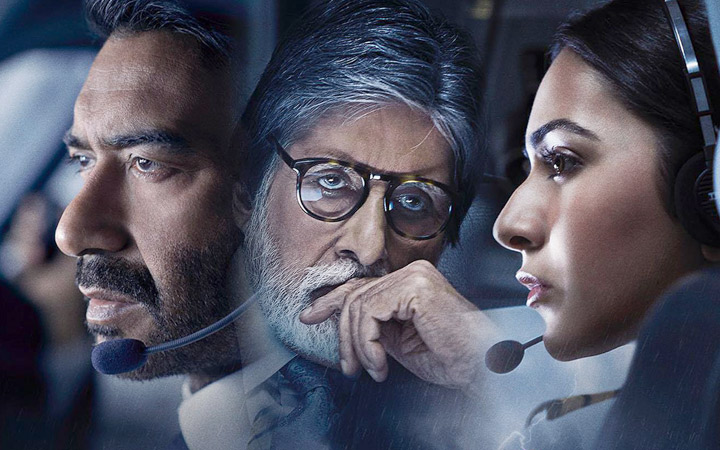 Sandeep Kelwani’s story is inspired from true events and is novel as it deals with a flight caught in turbulence and its after effects. No such film has been made on this topic before in Bollywood. Sandeep Kelwani and Aamil Keeyan Khan’s screenplay is quite effective in the first half, especially in the aircraft scenes. Post interval, the writing however could have been better and not so talk heavy. Sandeep Kelwani and Aamil Keeyan Khan’s dialogues are sharp. A few one liners will raise laughs.

Ajay Devgn’s direction is decent. He deserves brownie points for gripping audiences in the first half. The way he has kept the focus on the happenings in the cockpit is seen to be believed. The intermission point is clapworthy. The entry of Narayan Vedant in the second half enhances the excitement. However, the courtroom drama, which should have been equally nail biting, drags at this point here and becomes too talk heavy. A few moments stand out though. However, it’s too lengthy.

RUNWAY 34’s beginning is okay, showing how Vikrant partied a day before. The film gets better once the flight takes off. The scene where Vikrant comes out of the cockpit and pacifies irate passengers is a memorable sequence. Same goes for the intermission point. In the second half, Narayan Vedant’s track entry is quite good. In the courtroom drama part, the scene where Vikrant undergoes for a lie detector test and where Tanya blurts out that Vikrant might have had a drink while flying the plane stand out.

Speaking of performances, Ajay Devgn is in a great form, as always. He is a bit laidback in the initial scenes and the way it changes once he realizes that the plane can crash. His silence also speaks a lot in the interrogation scenes. Rakul Preet Singh is quite impressive, especially in the first hour. Amitabh Bachchan has a late entry but manages to obviously rock the show. Angira Dhar (Radhika Roy) doesn’t get much scope. Boman Irani (Nishant Suri) is fine but his track is weak. Same goes for Aakanksha Singh (Samaira; Vikrant’s wife) and Vijay Nikam (Tripathi; ATC staffer at Trivandrum). Hrishikesh Pandey (Yusuf Rangoonwala) is wasted. Carry Minati plays himself and is funny. Flora Jacob (Alma Asthana) stands out.

On the whole, RUNWAY 34 boasts of fine performances, technical brilliance and a gripping first half. However, the slow moving and talk-heavy second half dilutes the impact to a great extent. At the box office, the film will appeal to multiplex frequenting audience.

SuperCar Rikki stops the Chemical-made Aquaman from destroying the City

SuperCar Rikki stops the Chemical-made Aquaman from destroying the City