THAR is worth watching for its plot, direction, music score.

THAR is the story of mysterious happenings in a faraway town. The year is 1985. In the town of Munabo, Rajasthan, a gang attacks a house, where the daughter is about to get married in a few days. The girl’s parents are killed while their wealth is stolen away by the gang. The next day, a man called Suwa (Akkshay Gunaawat) is tortured to death. Inspector Surekha Singh (Anil Kapoor) is given the charge to solve these cases. With the help of his colleague Bhure (Satish Kaushik), he goes about investigating and trying to find if there’s any connection between the two killing episodes. Meanwhile, Siddharth (Harsh Varrdhan Kapoor), a mysterious man arrives in Munabo. He is an antique dealer, based in Delhi. He needs trained men for his work and his search takes him to the house of Panna (Jitendra Joshi). However, Panna is away in Calcutta, leaving his wife Chetna (Fatima Sana Shaikh) behind. An attraction develops between Panna and Chetna. Meanwhile, Surekha finds out through his investigation that the murders are related to the illegal opium trade and that players from Pakistan are also involved. What happens next forms the rest of the film. 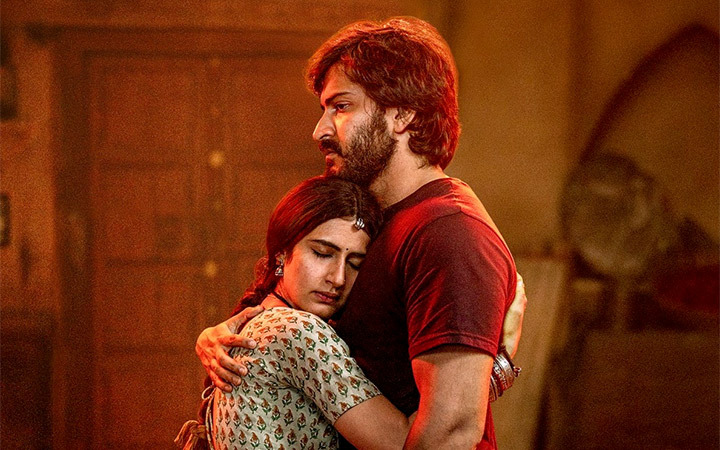 Raj Singh Chaudhary’s story is simple. However, Raj Singh Chaudhary’s screenplay (additional screenplay by Yogesh Dabuwalla and Anthony Catino) is splendid. The writers have peppered the narrative with some intense and unexpected moments. The characters are quite interesting and how they are all related to each other also makes for a great watch. On the flipside, the side tracks are not developed well. Anurag Kashyap’s dialogues are sharp.

Raj Singh Chaudhary’s direction is terrific and takes the film to great heights. Firstly, he deserves brownie points for opting for such breathtaking locales. You have seen films shot in Rajasthan in hundreds of films. However, THAR will blow you away as it has been filmed in never-before-seen places. This itself makes for a fun watch. Secondly, the director treats THAR like world cinema films. The barren locations, the silence, and the idea of an outsider coming to a strange town are an homage to the Western, cowboy films. Lastly, he packs a lot in 108 minutes of runtime. The scene where viewers learn who is the killer might be predictable and yet will leave them stunned. A few developments in the second half keep viewers on the edge of their seats. The finale is nail-biting. On the flipside, the track of Hanif Khan (Rahul Singh) and the entire opium trade is weak. It’s not well woven into the principal narrative. Secondly, the internal struggles faced by Surekha also should have been better depicted. Lastly, a few questions remain unanswered.

Speaking of performances, Anil Kapoor, as always, rocks the show. He gets into the skin of the character and delivers a fine performance. Harsh Varrdhan Kapoor hardly has any dialogues and communicates beautifully through his eyes. The actor has surely evolved and THAR proves it. Fatima Sana Shaikh leaves a huge mark and gives a lovely performance. Satish Kaushik is dependable as always. Jitendra Joshi, of SACRED GAMES fame, gives yet another memorable performance. Mukti Mohan (Gauri; Dhanna’s wife) and Nivedita Bhattacharya (Pranati; Surekha’s wife) do well, and the same goes for the actor playing Anil Kapoor’s son. Mandana Karimi (Cheryl) is nice in a cameo. Akkshay Gunaawat, Sanjay Dadhich (Kanwar) and Sanjay Bishnoi (Dhanna) are okay. Rahul Singh is good but is let down by the characterization. Akshay Oberoi (Arjun Singh) is wasted. Suraj Vyas (Maakhan; dhaba owner), Anushka Sharma (Babita) and Shubham Kumar (Babita’s lover) are okay.

There’s only one song in THAR and is played in the opening credits. Composed by Shashwat Sachdev, it is quite impressive. Ajay Jayanthi’s background score is terrific. The music adds to the intrigue and mystery and is surely one of the most memorable BGMs in recent times. Shreya Dev Dube’s cinematography is splendid. The DOP has done total justice to the virgin landscape depicted in the film. Wasiq Khan’s production design is realistic. Priyanka Agarwal’s costumes are authentic. Salaam Ansari’s action is disturbing as per the requirement of the script. Atomic Arts’ VFX is convincing. Aarti Bajaj’s editing is razor sharp.

On the whole, THAR is a film of international standards. It’s a surprise of the season and worth watching for its plot, direction, music score and the never before seen locales of Rajasthan.