The Taapsee Pannu starrer SHABAASH MITHU tells an inspiring tale of one of the greatest cricket legends in the world.

SHABAASH MITHU is the story of a legendary sportsperson. The year is 1990. In Hyderabad, a school-going girl named Noorie (Kasturi Jagnam) is forcibly enrolled in a Bharatnatyam class. This is because she plays cricket all day and hence her mother fears that she’s becoming too boyish. In the dance class, she befriends Mithali Raj (Inayat Verma). Noorie starts playing cricket with her. She advises Mithali to use her Bharatnatyam dance techniques to get better at the game. The trick works and Mithali’s cricketing skill improves. One day, coach Sampath (Vijay Raaz) spots her and advises her parents to enrol her into cricket coaching. The coaching helps Mithali even more. At the age of 15, Mithali Raj (Taapsee Pannu) is selected at the national level. She shifts to the Women’s Cricket Board (WCB) sports facility where she meets the national players. The WCB chief Shanta (Geeta Agarwal) is sympathetic and even motivating towards Mithali. However, the rest of the players bully Mithali. How Mithali wins them over with her attitude and cricketing talent and how they all then fight not just on the field but even the prejudice towards women’s cricket off the field forms the rest of the film. 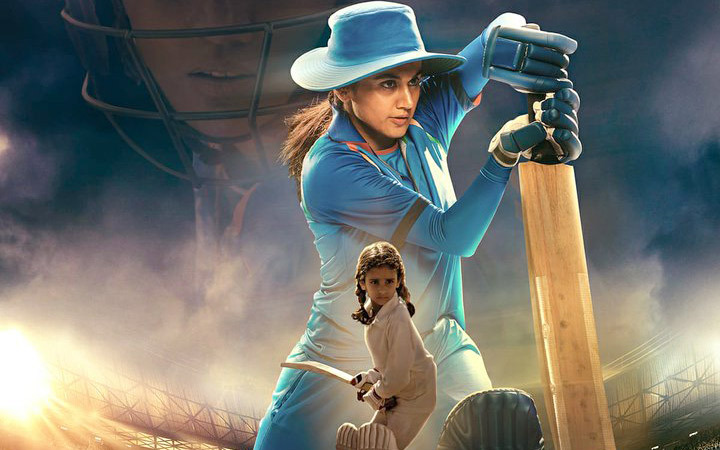 Ajit Andhare’s story idea is fascinating. Priya Aven’s story is inspiring. Also, many won’t know the struggles faced by Mithali Raj and that adds to the impact. Priya Aven’s screenplay is effective. The writer has peppered the film with some very fine dramatic and entertaining moments which keep the interest going. A few scenes, however, are too stretched and could have been written in a more compact manner. Priya Aven’s dialogues are decent, but the ones mouthed by young Noorie would surely raise a lot of laughs.

Srijit Mukherji’s direction is fair. He manages to engage audiences with Mithali Raj’s unbelievable journey. The script had some great scenes and moments and Srijit managed to make them look better with this execution. Comparisons will of course be made with the recent film, ’83 [2021], which was also a cricket biopic. But the Ranveer Singh-starrer focused more on the happenings on the ground. SHABAASH MITHU excels as it mostly throws light on the adventures in the life of Mithali and her colleagues off the field. However, where it falls short of ’83 is that the Kabir Khan-directorial recreated the matches and it enhanced the authenticity. In SHABAASH MITHU, the footage from the real matches has been used in the final and Taapsee has been masked in place of Mithali. Moreover, this whole sequence is shown in a very hurried manner. Both these factors take away some impact. The pace of the film is slow and this 162-minute-long film could have been shorter. Lastly, the film lacks a few clap worthy scenes, which is a must for such sports films.

SHABAASH MITHU begins with the song ‘Fateh’ and it’s not well executed. The childhood portions of Mithali and Noorie are very entertaining and unlike any other childhood sequence in any film. Mithali’s interactions with Sampath also add to the fun. Mithali’s bullying scenes and how she teaches a rival player a lesson are engaging but the more memorable part is the intermission point at the airport. The second half begins with a poignant scene of Mithali having a heart-to-heart chat with her team players. Mithali hitting at the CAI chief (Brijendra Kala) is quite good. The film drops a bit here but picks up when Mithali meets Subodh (Tahir Anand) for marriage. Another interesting sequence is when Mithali and his friends meet Neelu Paswan (Sampa Mandal) and her hubby-to-be at her marriage. The match sequences are okay but the film ends on a heroic note.

Taapsee Pannu puts in a lot of hard work and it shows. One expects a lot from her in terms of acting prowess and she doesn’t disappoint. However, she’s restrained in a few places, possibly as Mithali, in real life, is not overtly expressive. Yet, a little better act would have worked more in these scenes. Vijay Raaz is dependable as always. Kasturi Jagnam is quite entertaining as the young Noorie. Inayat Verma is cute and does very well. Brijendra Kala and Ramsingh Falkoti (Peon Bala) are decent in the crucial sequence. Sampa Mandal is the most memorable out of all the team players. Mumtaz Sorcar (Jhorna Ghosh) comes next thanks to her performance and bowling style, followed by Shilpi Marwaha (Sukumari Marwah). Darwesh Sayyed (young Mithun) is fine as the bully brother. Sameer Dharmadhikari (Mithali’s father Dorai Raj), Jyoti Subhash (Mithali’s grandfather) and Nishant Pradhan (Mithun Raj) don’t get much scope. The same goes for Anushree Kushwaha (Noorie). Geeta Agarwal and Tahir Anand leave a mark. Ayaz Meon is passable in a cameo. The actors playing the other team members are good.

Amit Trivedi’s music fails to entice. The two versions of ‘Hindustan Meri Jaan’ are not adrenaline-pumping. ‘Agaaz Hai Tu’ and ‘Woh Galiyaan’ are forgettable while ‘Udd Gayi Re Muniya’ is the best song of the lot. ‘Fateh’ (by Salvage Audio Collective) is foot-tapping but hasn’t been picturized well. Salvage Audio Collective’s background score is quite novel and works.

Sirsha Ray’s cinematography is neat and the cricket scenes are shot in an uncomplicated manner. Rita Ghosh’s production design is realistic. The same goes for Sachin Lovalekar’s costumes. Puneet Gautam’s cricket choreography deserves praise as it adds to its authenticity. Redefine and White Clap’s VFX is great, though, in a few scenes, it could have been better. A Sreekar Prasad’s editing should have been sharper as a few scenes go on and on.

On the whole, SHABAASH MITHU tells an inspiring tale of one of the greatest cricket legends in the world. At the box office, it has the potential to draw in audiences, especially in urban centres. It also deserves tax-free status.